AJ Perkins, President Could anyone have foreseen a day when a state’s energy supply would exceed the demand?

Amazingly, surplus energy is a predicament presently ailing the state of California. Earlier this year, California set two renewable energy records: the most solar power ever flowing on the state’s main electric grid, and most solar power ever taken offline because it wasn’t needed. “Utilities need our help to store clean energy. Currently, they lack resources to store excess energy and utilize it when necessary,” says AJ Perkins, president of DR Microgrid, an advanced microgrid integrator that tackles today’s energy challenges in an unprecedented manner.

The reasons for the skewed supply-demand ratio are obvious. With new policies mandating that 60 percent of the state’s electricity comes from carbon-free sources by 2030, California’s utilities are ramping up their efforts to purchase more renewable energy. As a result, the state’s fleet of solar farms and rooftop panels are frequently generating more electricity than Californians use during the middle of the day. To aggravate matters, new renewable energy plants are slated to go online over the next year, allowing California to meet the 2030 deadline a decade ahead of schedule.

It has proven to be. Besides grappling with economic and physical strains on the grid lines and power systems, the state’s lawmakers have been forced to transmit excess power to states such as Arizona, to prevent wastage of energy. In fact, California has paid states just to take its excess power supply. Also, solar and wind farms have had to throttle back on production, an expensive option that does not benefit anyone.

Despite producing all this excess clean energy, California’s utilities—held culpable for the 2018 wildfires—are reeling in the aftermath of the tragedy that killed 86 people and uprooted 14,000 homes. Starting this year, California’s utilities now have the CPUC’s approval to shut off the grid during times of danger fire promoting conditions are present or oncoming. The mandatory shutdowns are already here. In June, PG&E implemented the first public safety power blackout that affected 22,700 consumers (over an entire weekend). While shutting off power during Californian fire seasons is a good initiative that will likely prevent deadly wildfires, businesses are set to suffer the consequences.

Enter DR Microgrid, a company that creates microgrids to protect businesses from rising utility costs and blackouts, and facilitates the mass storage of excess clean energy. Unlike standard microgrids that are both laborious and expensive, DR Microgrid has devised a patent-pending process that enables easier integration of microgrids into existing solar energy systems. While microgrid installations typically take up to a year, DR Microgrid’s plug-and-play technology can be harnessed within three to six months. Perkins elaborates, “We build our microgrids around an oversized power storage system so that energy can be value-stacked for reasons that extend beyond the obvious: peak shavings and battery backup. Our systems have the capacity to supply for human response efforts such as the California wildfires and hurricanes across the country. Also, our clients stand to make specialized incentives by selling energy back to the grid.”

However, DR Microgrid—working with top Californian utilities such as PG&E and SDG&E—has taken this existing model and flipped it on its head. Rather than asking its customers to curtail or shut off equipment during heavy grid usage times, DR Microgrid acts as an aggregator and deploys large commercial grade batteries and advanced microgrid control systems to meet the energy demands of its customers while also funneling energy back to the grid without upsetting normal building operations.

For example, DR Microgrid recently worked with a manufacturer to perform a full offset demand response. Previously, the manufacturer used to shut off lights, ACs, and equipment in parts of their building to meet their obligation and sometimes opted out of the event when operations suffered.

DR Microgrid, on the other hand, took the entire building offline with their microgrid and the customer was compensated for the entire 100 KW. “We allow businesses to carry on with their operations. while also maximizing demand response revenue. This is our ultimate value proposition, and a market offering that no other company has ever offered before,” says a proud Perkins.

There is also the other side of the coin. As utilities struggle to harness excess green energy (as explained above), they are now compensating consumers for increasing their consumption by turning on the equipment. DR typically disrupts a building, whether consumers are requested to turn their equipment on or off. Again, DR Microgrid has flipped the script. Perkins explains, “Since we are notified a day in advance (of a DR program event), we ensure power is redirected to the client’s building, and we leave our battery empty. So, when an event is called, they (client) need not turn on the equipment at all.”

How the Technology Works

DR Microgrid’s solutions are energy storage systems that can disconnect from the grid and continue to power facilities for long durations. While building its microgrids, the company integrates energy from various sources—solar, wind, co-generation—into a large energy system that is controlled by an advanced ADR-compliant microgrid controller.

The AI-enabled controller allows DR Microgrid to gather, utilize, and react to data to ensure the most efficient delivery of energy wherever necessary. The AI controller possesses the learning capabilities to react to more than just business needs and the way businesses operate. Perkins says, “The AI constantly gathers data such as weather patterns, cloud coverage, the current state of the energy markets, and ascertains the most optimal method to utilize and distribute energy.” 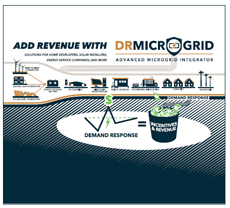 While collecting data is one side of the equation, DR Microgrid’s intelligent storage systems are unique due to their intrinsic ability to funnel the energy wherever needed. DR Microgrid often uses the analogy of a car navigation system to highlight this aspect of its technology, “A standard car navigation system will tell you where the traffic is headed. However, that information is meaningless unless the navigation system can advise the best way to navigate around that traffic. By the same token, we don’t just show you a better route, we actually drive the car for the energies,” illustrates Perkins.

DR Microgrid’s technology allows businesses to “actively control” their energy ecosystem, which could include solar, CHP, battery storage, and other equipment and appliances. Through a comprehensive dashboard, users can turn pieces of equipment on or off, set their energy preferences, and automate their energy consumption patterns. By controlling their precise energy consumption and usage, businesses can thereby sell their excess power to various energy markets or support human response or DR programs.

This ability to streamline energy consumption has proven equally beneficial to grids. Perkins explains, “Thanks to our AI-driven technology, grids can now predict the exact energy consumption or requirement for days in advance, and effectively plan their cycles.”

To cite an example of the effectiveness of DR Microgrid’s technology, Perkins narrates a customer success story involving a manufacturing facility.

The client was paying $22,000 per month just on utility bills despite investing heavily in a rooftop solar PV system. After examining their facility, DR Microgrid uncovered that the exorbitant bills were due to the demand charges (that all commercial facilities are levied with). Since the client’s solar energy was not enough to address peak hour demands, it was struck with high demand charges. The client also experienced brownouts where the power output fluctuated and damaged equipment.

DR Microgrid built a new microgrid to support the client’s existing solar energy system—by integrating CHP, AI microgrid controllers and batteries. Post deployment, the client could expertly control their energy consumption through a centralized dashboard and see what his existing solar system is producing, whereas prior, the business owner had no idea what his PV system was doing. “Besides completely eliminating their utility bills, they are now enjoying uninterrupted energy supply which keeps their operations running and no more equipment damage,” informs Perkins.

The Californian fire seasons, and the mandatory power shut offs that accompany them are starting to affect residences as well. Last year, several regions located hundreds of miles away from a fire or potential fire, were also victims of blackouts. To address the energy needs of residences, DR Microgrid will soon launch a new residential solution titled DR Nanogrid that will offer the same benefits of microgrids but at a smaller scale.

Perkins will introduce the new residential solution at the North America Smart Energy Week (23-26 Sept.) followed by the Net Zero 19 Conference in LA and the Energy Storage North America Conference in San Diego in October and November respectively. Shortly after, a white paper will be released to detail the integration of microgrids/nanogrids with existing solar energy systems. Through these conferences, DR Microgrid hopes to reach out to more installers.

Already a difference-maker in California’s energy paradigm, DR Microgrid is primed to reach greater heights. Under the leadership of Perkins, who has worked closely with the California Energy Alliance to create a support policy within the state, DR Microgrid has forged a number of key strategic alliances with companies such as Lockheed Martin Energy, 365 Pronto and Optec International. The latter has launched a new technology of solar LEDs and cameras—an integrated camera system onto a solar LED panel—allowing DR Microgrid to put lights and cameras in remote locations without any wires.

Through such alliances, the company has access to more than 9,000 solar installers, a number that is bound to rise. Perkins says, “We are actively seeking more alliances throughout the U.S. so we can support businesses, residences, and the utilities themselves.” With the business of utilities witnessing a drastic shift, DR Microgrid has admittedly “taken on the responsibility” to support the changing landscape of energy. With three major Californian utilities proposing a spike to their energy rates, DR Microgrid’s sales pitch gets more pronounced by the hour. “We are giving businesses the opportunity to shield themselves from rising utility rates, protect themselves from public safety power shut offs and earn revenue for supporting the grid,” he adds.

DR Microgrid plans to expand nationally, beyond California, and support human response efforts such as the hurricanes in Florida and other natural disasters across the country. “The entire nation is dealing with weather and grid-related challenges. It is crystal-clear that the time to embrace microgrids is NOW,” concludes Perkins. 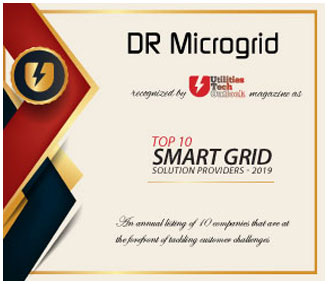 Description
Dr. Microgrid Protects businesses from utility costs and blackouts through creating microgrids. The company takes advantage of specialized incentives through demand response, and aggregate their customer base to sell energy back to the grid. It also provides megawatt sized battery storage systems, creating resilience and energy independence operating within utility incentive programs designed to cut demand charges. Dr Microgrid further integrates smart controls that effectively allow businesses to get off the grid for prolonged periods